Contributions to mechanics of nanomaterials

Invented a novel experimental method to study thermo-mechanical behavior of nano scale materials in situ in electron microscopes
Most micro electronics and micro mechanical components have nano scale structures. Their thermo-mechanical behavior and their structure-property relations are far from being fully understood. Such studies had been challenged by instrumentation that allows testing of nano scale material samples while observing their microstructures. Saif developed a micro sensor that allows to (1) measure thermo-mechanical properties of free-standing thin films as thin as 20 nm, and (2) carry out the measurements in-situ in Scanning or Transmission Electron Microscope (SEM, TEM) to inspect their micro structure and explore their structure-property relations. Here, the sensor and the sample are cofabricated which avoids sample handling and alignment issues. The micro instrument was successfully applied to carry out in-situ experiments on thin gold and aluminum films with grain size of 10-200 nm in SEM and TEM for the first time. It was found found that as the grain size decreases, (1) elastic modulus decreases, (2) metals show non-linear elastic response with small plastic deformation, and (3) yield stress increases, reaches a maximum value, and then decreases with further decrease of grain size. In-situ observation of Al samples shows little dislocation activity in grains with size 50 nm or less even at high stresses, which points to a grain boundary based mechanism for nano grained metal deformation.

It has been well known that mechanical properties of metals depend on the size of the samples and their microstructure. However, the influence of heterogeneity in microstructure was far less understood. Saif showed that for nano grained metals, heterogeneity in grain size and texture result in two anomalous mechanical behaviors: ultra small grained (50-100nm) metals can recover a significant part of their plastic strain under macroscopic stress free condition. Conventionally, plastic strain is considered to be permanent and irreversible. Slightly larger grained (100-200nm) metals show yielding (deviation from linearity) during unloading. Conventionally, macroscopic samples unload along a linear stress-strain path. Both of these anomalous behaviors originate from the heterogeneity of microstructure in the samples due to variation in grain size. During loading, smaller grains deform elastically while relatively larger grains deform plastically. Upon unloading, the smaller grains induce reverse stress in the larger grains resulting in strain recovery and yielding. Saif verified this mechanism by in situ tests in TEM. This fundamental mechanism in nano-grained samples explained a wide range of controversial reports in the literature. On the other hand, brittle single crystal silicon samples acquire ductility even at low temperatures, at the expense of increasing yield stress with decreasing size. Saif showed that this reduction in brittle to ductile transition temperature is linked with increased flaw tolerance of small samples.
Key publications:
• Rajagopalan, et al. Science, 2007, 315, 1831.
• Kang and Saif, Advanced Functional Material, 2013, 23(6), 713. 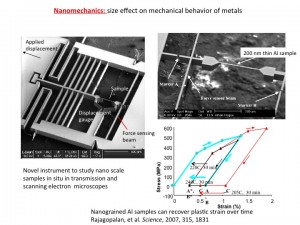 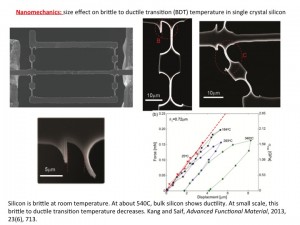 Neuromechanics
Discovered that neurons in vivo generate tension, which is essential for neuronal functions.
A large majority of neurons have a long (100 µm to meters) single axon that forms junctions (synapse) with muscle tissue or another neuron. They carry neurotransmitters enclosed within vesicles at the synapse. The density of the vesicles is high at the neuro-muscular or neuron-neuron synapse. In response to a stimulus, some of the vesicles are released which excite the post synaptic muscle or neuron. A signal is thus transmitted. Biochemistry is considered to solely dictate the mechanisms of vesicle assembly and clustering. Saif showed for the first time, using embryonic Drosophila (fruit fly) nervous system, that vesicle clustering at the neuromuscular synapse depends on mechanical force (tension) within the axons. Axons (1) actively generate and maintain the tension; (2) this tension serves as a signal for neuronal growth, and (3) the tension is essential for clustering of neurotransmitter vesicles at the synapse. If the tension is released mechanically (such as by severing the axon), vesicle clustering vanishes, but is restored when mechanical tension is applied to the severed axon. Thus mechanical tension in neurons might be fundamentally linked with synaptic plasticity – a new paradigm in the understanding of memory and learning, and in the treatment of neurological diseases.
Key publications:
• Siechen et al. Proceedings of the National Academy of Science 2009, 106:31, 12611.
• Ahmed et al. Scientific Reports 2014,4 Article number: 4481. 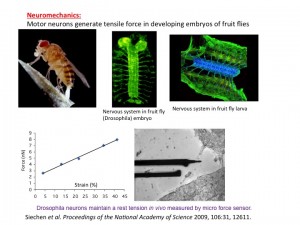 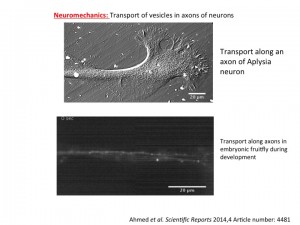 Cancer metastasis
Showed that metastatic transition in cancer cells might be facilitated by appropriate mechanical microenvironment of the tumor.
Cancer deaths are primarily caused by metastasis, not by the parent tumor. During metastasis, malignant cells detach from the parent tumor, and spread through the circulatory system to invade new tissues and organs. The physical-chemical mechanisms and parameters within the cellular microenvironment that initiate the onset of metastasis, however, are not understood. Saif revealed, using human colon cancer cell lines, that cancer metastasis may be initiated by appropriate mechanical micro-environment. For example, the colon cancer cells become metastatic and invasive when cultured on soft (10-40KPa) substrates, but not on hard perti dishes. On soft substrates, the cells first form tumor like clusters. After about seven days of culture, the tumors disintegrate and the cells detach from one another. They become migratory, proliferative and invasive (measured by invasive assays). Saif and his collaborator, Professor Kuhlenschmidt of Pathobiology,  showed that these cells overexpress many of the well-known biochemical markers and oncogenes that are the hallmarks of metastasis, and suppress genes that are associated with cell death (apoptosis). Together with Professors Hong Chen, Stephane Lezmi and Shahjahan Ali, the team showed, using mouse models, that these cells are more tumorigenic and invasive compared to their predecessors. Understanding how the mechanical microenvironment regulates cancer cell biological processes responsible for metastasis represents a newly developing paradigm. This new paradigm has the potential to add novel anti-metastasis therapeutics to the current arsenal. Saif’s work also shows the potential of developing an in vitro metastatic model. Such a model would allow rapid screening of putative anti-metastatic drugs.
Key publications:
• Tang et al. Biophysical Journal, 2010, 99:2460
• Tang et al. Molecular Cancer 2014, 13:131. 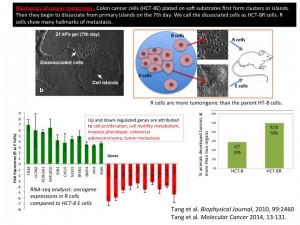 Biological machines
Developed and studied the first biohybrid flagellar swimmer.
Engineering has produced marvelous machines and devices over the last century. Biological systems evolved over millions of years. With the increasing understanding of living cells, there are possibilities of developing biological machines where engineering precision meets the exquisite power and variability of life. One can envision that such machines will have unprecedented capabilities, as they would carry the footprints of the evolutionary journey of life. Saif demonstrated such an elementary biological machine – a self-propelled, microscale flagellar biohybrid swimmer consisting of a flexible filament (1/10th size of human hair) and rat heart cells (cardiomyocytes). The randomly placed cells on the filament communicate with each other over long distances, synchronize their beating and emerge as a single actuator. The actuator beats with a single frequency and bends the filament. The bending wave travels towards the tail end of the filament generating a thrust to propel the swimmer forward. This is the first evidence of an autonomous biohybrid swimmer at small scale. In the future, more complex and intelligent swimmers might be deployed to deliver drugs in vivo at targeted locations. 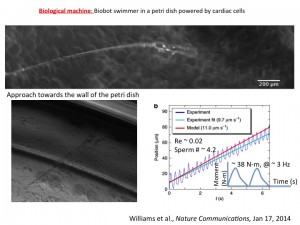 See the videos of swimming here.swim_4T_scalebar 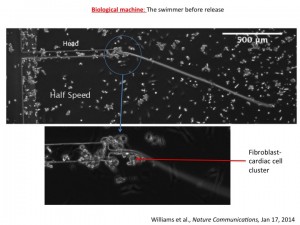 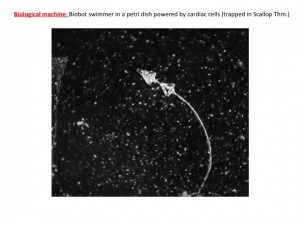 Cardiac cells are all along the length of the PDMS filament, generating reversible dynamics, and the swimmer goes nowhere. See the video here.